You are here: Home / NLP & Hypnotherapy Courses / Wordweaving / About Wordweaving

Wordweaving™ began with a simple question: What makes a hypnotic suggestion work? It turned out to be the kind of Alice in Wonderland question that sucks you down the rabbit hole. My initial training in hypnotherapy hadn’t strayed far from the traditional model that trance renders people open to suggestion, the deeper the better, and then you deliver suggestions calculated to relieve the person’s problem. I quickly found that reading the same script to different people had varying effects, and that trance depth – as far as I could observe it – had little to do with whether it worked or not. I got to the point where I thought that suggestions only worked on the suggestible, so actually felt I was cheating if ‘all’ I did with a client was read them a script.

Stumbling across NLP increased my discontent. It opened my eyes to the differences in the way people think and the way we each create our own ‘model of the world’. With so many levels of difference between one person and another how can one script possibly work on everyone whose only connection might be the problem they share?

Milton Erickson made an early impression. The idea of the client having all the resources they need to solve their own problems really appealed, as did his indirect way of making suggestions. The Milton model was a starting point, but it was only a beginning, because I noticed that many therapists using it were certainly vague, but hardly artful. Surely suggestions had to have some point?

Years of clients helped me with this. I evolved a model that worked well at mapping the process of a client’s problem (the Matrix model). This enabled the therapist to accurately map a client’s problem as it happened from beginning to end and guide what techniques and suggestions to use. 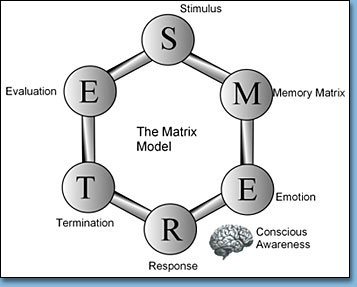 A slight variation of Robert Dilt’s Neuro-logical levels provided me with a second way of thinking about where I wanted to aim a suggestion – i.e. where the unconscious could be guided to seek an effect of what you were saying.

So, the first part of Wordweaving™ emerged, with a rule to guide it: “Every suggestion pattern must be aimed at a point in the Matrix model or a Neuro-logical level.”

The next step of the journey involves a book called Trances People Live by psychotherapist Steven Wolinsky. Reading it turned my practice upside down. In a nutshell Wolinsky suggested that trance states are part of everyday life – nothing new to me so far – but then made the point that problems are part of everyday life too, so trance phenomena form part of the way a client creates and perceives their issue. I quickly found that clients described their problems in ways that could be described by the standard trance phenomena – things like sensory distortion, age progression and positive hallucination. It came to me that there was a link between these phenomena and what Bandler and Grinder had described as ‘universal modelling processes’ – deletion, distortion and generalisation; what the mind does with information it receives through the senses in order to create the model of the world each person lives in. This to me was tremendously exciting. Trance phenomena became the means by which the client’s mind created the perception of their problem, so a core element of any suggestion pattern had to be one or more trance phenomena – without them you were painting without any paint. Thus the next ‘rule’ of Wordweaving™: Every suggestion pattern must contain a trance phenomena. And, if you can, use the ones the client uses to create their issue – because you know they’re ones they’re good at. All you have to do is learn to listen for them.

The third aspect to Wordweaving™ is simply how you couch the suggestion. My preference is to use indirect language – particularly presuppositions – because they guide the client to find their own solutions. Direct suggestions tend to involve the therapist’s model of the world in the solution the suggestion is aimed at, which I don’t think is as good as using the client’s. Also, by the use of the form “you will…” the situation may be created where, if the instruction isn’t fulfilled, everything else that the therapeutic relationship has created could be negated i.e. ‘if that suggestion hasn’t worked, what else hasn’t?’

Consequently, a lot of the focus of Wordweaving™ training is improving the ability to utilise indirect language patterns – but for a purpose; to deliver appropriate trance phenomena to a particular part of their problem pattern in order to change the client’s perception of that problem. With practice it is perfectly possible to be able to create such patterns spontaneously, based on the information you have gained from the client. Essentially, that is what volume I: The Science of Suggestion is about – the model of Wordweaving™ and how to build suggestions in this way.

Originally, when I sat down to write my second book my intention was to write a book about therapeutic interventions – particularly regression. But, as I began to build its outline, I realised I was missing a vital step. Wordweaving taught how to create suggestions, and the second would teach interventions, but what about how to combine them? What about the framework of therapy within which these two books would sit? I realised I needed to change tack – and so the second became ‘The Question is the Answer’. In this book I go into depth about problems as patterns made up of four parts; process, structure, context and consequence. It describes how to identify the client’s problem state (their evidence for having their issue) and how to identify their solution state (how they would know they’re better).

Therapy is about helping them move from problem to solution, and the model in the book gives you a framework to work within to achieve this. It teaches how to identify the information the client provides about each part of their problem pattern, and how to integrate it into your Wordweaving™ to shift their perception towards what equals their solution.

Within the book is a model of questioning taken from the close study of the work of Gil Boyne, a simple and elegant way of identifying core issues in a very short space of time.

Finally – focusing on the importance of the element of consequence in people’s thinking – are some exercises inspired by the work of Positive Psychology to help the client create within themselves the anticipation of their future being the one they want, helping them to feel more optimistic and giving them the confidence to make the decisions that would change their lives.

Overall the three books present a comprehensive approach to therapy, one that I’ve been teaching since 2000 under the title of Cognitive Hypnotherapy.

I press play on the CD player and the opening bars of Madonna’s ‘Holiday’ suddenly filled the car. Instantly my two sons, Mark, 7, … END_OF_DOCUMENT_TOKEN_TO_BE_REPLACED