You are here: Home / About Us / Our Approach

Our approach is significantly different from the traditional schools of Hypnotherapy. We draw on recent discoveries and ideas from Evolutionary Psychology, Positive Psychology, Cognitive theory and NLP and incorporate them into a modern idea of hypnosis to provide a framework for therapy. We do not advocate one single approach as the answer to all of life’s problems. We introduce our students to a range of techniques drawn from different disciplines that we have found to be the most effective tools for change so far. These are moulded into an approach tailored for the specific needs of each client. 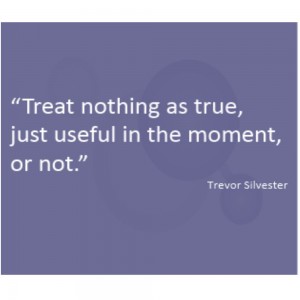 Trance states have been utilised by most societies since the dawn of recorded history. The ancient Egyptians had ‘dream temples’, Yogi’s perform amazing feats using deep level meditation, and the Native Americans used sweat lodges to induce a changed state for ritual purposes. Hypnosis uses mind-states that we all enter voluntarily on a daily basis; who hasn’t lost themselves in their thoughts on the drive to work?

For us the interesting question is ‘who was driving the car while you were lost in those thoughts?’ 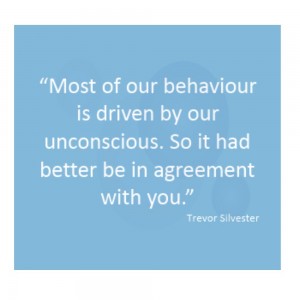 The role of the unconscious

Our answer would be ‘your unconscious’. In our view the unconscious acts as a protective device whose purpose is to keep you safe. Moment to moment it is processing millions of bits of information received from your senses and filtering them with the purpose of determining what in your environment is likely to bring you pain or pleasure. Without our ever realising it we will find ourselves motivated to move towards things (people, activities, behaviour) which our unconscious believes are good for us (on the basis of past experience), and avoid things it believes bring us harm.

The problem is that for 99% of the time the human race has existed we lived a Stone Age existence where ‘harm’ was obvious and physical. Our nervous system (mediated by the unconscious) is geared to protect us from sabre-toothed tigers, not modern stresses.

All behaviour has a positive intention

If any aspect of modern life is viewed by the unconscious as stressful it treats it like a threat (the tiger) and the fight or flight response is triggered to get you away from it. So, for example, going to pieces in an interview is actually the struggle between your unconscious trying to get you away from that situation and your conscious fighting to stay put. You can see why a basic assumption we use is “all behaviour has a purpose”; even when that behaviour is having a negative effect it has a positive intention behind it. 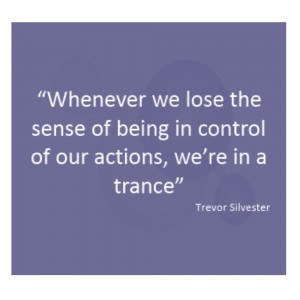 When the fight or flight response is triggered your body is flooded with hormones that perform certain functions, like increasing respiration, body temperature and moving blood to the muscles from any area of the body that isn’t involved in fighting for survival. That accounts for the butterflies in the stomach. It also takes blood from the brain because you don’t need to think to fight or run away. So you can basically think or feel, but not both at the same time. The moment the feeling of anxiety or nervousness reaches a certain level you become physically less able to think – that is why your mind goes blank and you struggle to put together a sentence. But boy could you run from a tiger!

This model of mental functioning can be used to explain the basis of many problems. Even smoking. If you had an experience when you were younger that led your unconscious to believe that smoking was a good thing (like it made you feel like you ‘belonged’), then it will continue to motivate you to crave cigarettes, no matter how much you consciously wish to stop.

It can be a mystery to us why we get locked into behaviours, beliefs and habits which we know reduce the quality of our life. It is because the unconscious tends to keep the thought patterns that generate them out of our awareness, and recent research has shown that the unconscious is responsible for about 90% of our daily behaviour.

Keeping yourself out of unhelpful trances

In Cognitive Hypnotherapy we believe that trance states are part of the normal experience of being human – as the research above suggests, we spend most of our day in some kind of altered state. Most people experience their issues as being beyond their control, as if some part of them takes over and makes them have the cigarette, eat the cake, run from the spider or go sick rather than give a presentation. As already mentioned, this is a consequence of their unconscious trying to keep you safe, and it uses trance states to make it possible. In a way every time you do something you can’t control you’re ‘hypnotised’ by your unconscious into seeing, feeling or doing things a certain way. In Cognitive Hypnotherapy we see our job as ‘de-hypnotising’ you so that you have control over those aspects of your life that you want to be different, and are able to see, feel or do whatever gives you the greatest freedom. If trance states are part of the pattern of your problem, then they are also a powerful part of the solution. 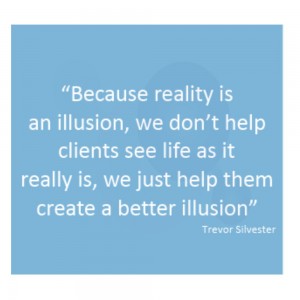 In a nutshell, Cognitive Hypnotherapy uses the client’s natural trance states (like you experience when driving) to assist in uncovering the feelings, thoughts and memory patterns that led to the problem, and which continue to maintain it.

Cognitive Hypnotherapy employs techniques to modify these patterns so the client is able to take control of their behaviour. Each client’s problem pattern will be formed uniquely, even when the label given to it is shared by many. Consequently each will require a different sequence of techniques, connected together by a pattern of suggestion based on their way of thinking. It’s what makes this such a fascinating career.

People have all the resources they need

It’s an interactive therapy where the therapist acts as a guide. The principle is that the client can find their own solutions with skilled assistance. It does not involve the therapist as a ‘controlling’ agent, or someone who dictates what is ‘best’ for the client. The client isn’t broken, we don’t ‘fix’ them. We find the most effective approach is for the therapist to work within the client’s model of the world, not force the client into the therapist’s. 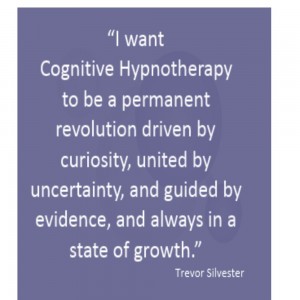 Working in this way involves a higher level of skill than many traditional Hypnotherapy models, which depend mainly on using scripts to treat the problem – if you have the same problem as another person you’ll get the same script. Also the content for the script will be the therapist’s ideas about what you need to hear. We think there’s a better way. We teach you Wordweaving, a unique approach to hypnotic language developed by Trevor that frees you from the need to use scripts by incorporating the client’s own words and ideas into a pattern of creative suggestion. With practice, Quest Institute Trained Therapists can create suggestions uniquely tailored to each client to tune their mind to what is useful, and to tune out what is not – the great thing is the client tells you which is which, so the suggestions are more readily accepted than ideas imposed by the thoughts of someone else. Treating each new client as a unique experience, rather than ‘another smoker’, or ‘another phobia’ increases your success and keeps this a fascinating and varied profession.

I press play on the CD player and the opening bars of Madonna’s ‘Holiday’ suddenly filled the car. Instantly my two sons, Mark, 7, … END_OF_DOCUMENT_TOKEN_TO_BE_REPLACED