You are here: Home / News / A fear of public speaking? What’s that about?

An event last weekend was one of my highlights of the year – and for the second year in a row. In 2010 we launched a presentation skills workshop for Questies interested in adding training to their income stream. It was a magical, transformative three days that went far beyond my expectations, and the feedback was amazing. Last weekend we ran it again and I wondered, as it approached, was it a fluke? Would we get the same response again? Certainly the run up was very similar: we have a higher last minute drop-out rate for this course than any other, and the emails we get beforehand indicate a high level of nervousness from many of the attendees.

The first morning you could light the building with the nervous energy in the room, and yet by the Sunday afternoon every single delegate was standing in front of the group talking comfortably, and often movingly, about what being able to do so has meant to them.

So the question I was left pondering is, why should this be so? Why do people get so het up about public speaking? Surveys seem to show time and again that fear of public speaking tops the charts, even outranking fear of death. As Seinfeld commented, the figures seem to show that at a funeral the person giving the eulogy would rather be in the box!

This is my take on it.

Our genes have evolved to select for sociability. Over millions of years it’s been our ability to work and collaborate together at the level that we have that has led to our success as a species. So individually, the ability to be acceptable within a group has proven important, if not vital, to our survival. The more you prosper within your clan the closer to the fire you sit, the bigger your share of the carcass, the better your selection of mates. And what causes us to prosper is the way we’re judged and rewarded within our social group, peer group, company or family according to the values that are held to be most important to them. Some are pretty universal – bravery, intelligence, honesty, those kinds of things. Others are specific to the culture: small feet, big feet, singing voice or practical ability. What matters here isn’t what the criteria is, but that our brain is sensitised to the fact of there always being criteria and asking ‘what is my value here, and how do I raise it?

That means that we’re hardwired for sensitivity to the way others respond to us. Just as a spider phobia can be created from a single negative exposure to one, while a neutral object like an apple would take several bad apple incidents, so it doesn’t take many youthful encounters with rejection or withdrawal of approval – or the perception of either – for us to become over-sensitised to situations where further similar censure could occur. Our unconscious is constantly building a mental model to guide us towards actions that will reward us and away from actions that will damage us or waste energy. So what can happen when we’re young to question our acceptability to others and cause our unconscious to seek to avoid exposure to their opinion? What can’t?:

Standing up in front of the class and getting ridiculed by the teacher for getting their times table wrong.
Running on stage during the school play and falling over your costume to the laughter of the crowd.
Your mother shouting at you for breaking something in the supermarket
Friends picking on you in the playground because your shoes weren’t fashionable.

That’s a short random list of stories that clients of mine have found to be the root of their fear of public speaking – which I think is really a fear of other people’s opinions. As you can see, it would be exceptional for a child to get through their formative years without experiencing something like those things on the list, a situation where they become the focus of attention in the eyes of others in unpleasant circumstances. Objectively quite trivial, but in the light of our sensitivity to any question about our social acceptability, subjectively of prime importance. And what happens to us is used to anticipate what will happen to us, so once the pebble of self-doubt has been dropped into your mindstream, the consequences can continue to ripple outwards for the rest of your life.

These are common problems that people bring to me and the people I train. And they can be sorted using Cognitive Hypnotherapy. And also, the presenting course has taught me, by the right training in the right environment.

Many of the group arrived on the Friday with a fear of presenting. Most had a belief that they need to be someone else to be a good presenter and are expecting ‘tricks of the trade’ to turn them into that someone else on stage. I’ve seen plenty of presenters who do just that, and I’m not going to add to them. I think the secret of good presenting, teaching or training is authenticity; the confidence to just be yourself.

Through a weekend of misdirection in the exercises I ask them to do, through a supportive and safe atmosphere they create, and through the feedback they receive from each other that makes them realise they share similar illusions about their limitations, they quickly begin to grow. And while I give them some ideas on presenting structure and some tips on state management and the like, what I’m mainly doing is taking away from them. I’m taking away the notion that they have to be someone else. I’m taking away the idea that they have to know everything, I’m removing the thought that presenting to a group is anything other than another form of conversation.

That’s why teaching people to present can be so personally transformative. It works indirectly on the illusion I think most of us walk around with to some degree in some context or another: that it’s not enough just being us, being someone else would be somehow better. There is no ‘better you’ to be than you, and no more fun to be had than fully enjoying who you are. And we should keep on learning until we believe that in any situation we find ourselves in. 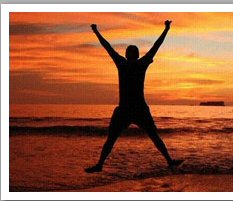 The message from the weekend is very clear. You’re already ok. Believing that will change your life. If you’re scared in situations where there isn’t anything real to fear, the feeling is just a signal that there’s something to learn that will help you grow, not a signal to run. And there are plenty of ways to help you grow – one of which is by stepping through the illusion of what scares you most.

My congratulations and gratitude to everyone who did that very thing.

I press play on the CD player and the opening bars of Madonna’s ‘Holiday’ suddenly filled the car. Instantly my two sons, Mark, 7, … END_OF_DOCUMENT_TOKEN_TO_BE_REPLACED