You are here: Home / News / A legacy of spirit

Watching TV last night was like stepping back in time. I’d guess I’d underestimated what two weeks of positive media coverage can do. All I’ve noticed – on the radio, in the papers, and on the TV over the last 48 hours has been the old parade of things gone wrong, bad news and depressing forecasts. Do we really have to go back to this?

There’s going to be a lot of talk about legacy after this wonderful Olympics, and it’s not surprising. For over two weeks we’ve lived in a different Britain, one where the press had no choice but to stop finding fault with everything and join the party, one where we got our fill of drama from actual drama, and where we remembered striving, succeeding, and failing as core human experiences that connect us to our neighbours. Is it any wonder I feel down at the prospect of returning to live in broken Britain after I’ve seen what this country can really be about? The legacy debate could confine itself to creating an enduring sporting platform, but I hope it aims at a larger vision.

There was a moment during the closing ceremony when a choice was paraded in front of us. Through the crowds of assembled young men and women, who’ve spent years chasing a dream and putting themselves through tremendous struggle to hone their talent…strutted the models. The plastic walking through the fantastic. Have we found anything in the cult of celebrity, overnight-success talent shows or Eastender values that lifts the spirits like people striving to be the best they can be?

I saw Sharon’s return to Albert Square heavily advertised during the Game’s coverage. Any chance she’s come back to open a youth centre to inspire a generation? No I didn’t think so.

Could the Leveson enquiry lead to an outcome where the press balance their coverage by reporting on human successes, and redefine the difference between what is actually in the public interest to know, and what is simply feeding our baser curiosity? It could, but will it?

Could our school system coax excellence through competition to better equip our children for the realities of life? Can it support every child in any aspiration? Teach them the value and ethic of struggle rather than treating competition as a dirty word? Encourage them to treat failure as a way of learning how to succeed, and encourage respect for the potential of our body on a daily basis? Imagine that Britain for a moment…

And could politics be about people actually representing us and not their own vested interests? I was grumpy all the way up to the Olympics because it felt as if it had been snatched away from us by the corporates and big wigs. And then we snatched it back. If we would only do the same with our governance.

The Olympics has probably been the high point of my life as a citizen of Great Britain. A moment when pride in my country actually meant something beyond jingoism – and it wasn’t the medals that brought that feeling. It was watching the creative brilliance of the opening bring the richness of our Britishness into such eccentric focus. It was seeing the spirit of the Games Makers demonstrate that we already have a Big Society, and the ‘reserved British’ public provide the joy that transformed an athletics meeting into a party. For over two weeks it’s been the coolest thing to be a Brit.

There are several highlights that underscore what the legacy can mean to us. Watching tens of thousands of Britons waving the Union Jack in celebration at the victory of a mixed race woman from Sheffield, a refugee from Somalia, and a Ginger jumper on the same night, took the flag out of the hands of the BNP and their ilk and gave it back to us.

Seeing Oscar Pistorius run – such a fusion of science and spirit – was wonderful, but the moment when the eventual winner, Ugandan Kirani James, asked to exchange race numbers with him, and hail the South African Blade Runner as an inspiration, took it to another level all together.

To see Katherine Grainger finally win gold after three silvers was like watching someone channelling Churchill’s exhortation to ‘Never, never, never give up’.
To see Gemma Gibbons remembering her dead mother in the moments after her victory reminded us of the importance of love.
To see her beaten by Kayla Harrison who’d been sexually abused by her coach reminded us once again that we’re defined by what we make out of the things that happen to us, rather than the things themselves. 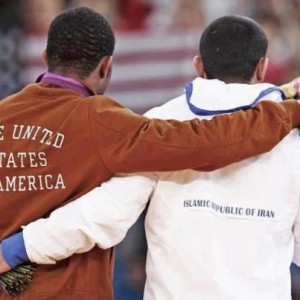 All are examples of what we’re capable of achieving, and what is truly worth celebrating about humanity. For me, the legacy is so much more than creating a platform for more sporting success. It’s about turning our country into a nursery for our children to grow into adults who strive – in every avenue of life. Who enjoy their success in whatever passion they have, who are encouraged to learn from their failures, who help their neighbours, who support their fellow strugglers. Who are taught kindness and giving as gold medal virtues. To always look on the bright side of life.

A legacy of spirit.

That’s the fire I hope the Olympic flame on our soil will light.

I press play on the CD player and the opening bars of Madonna’s ‘Holiday’ suddenly filled the car. Instantly my two sons, Mark, 7, … END_OF_DOCUMENT_TOKEN_TO_BE_REPLACED