You are here: Home / Media / Featured Media / Be precise about what you wish for

It was a surreal sight to see my name featuring beside Stephen Fry last week, because while I believe that we create the future we expect, I mainly mean that in terms of the state our thoughts of the future put us in, which then tends to cause us to behave in particular ways when that future arrives. So if you foresee a job interview going badly, or looking stupid when you ask someone for a date, then your brain gets you ready to run away or freeze when that moment comes. Such strong emotions make us stupid, so it’s not surprising that negative thoughts become self-fulfilling prophesies. – and of course, on the plus side, if you see both those events going well, then the mood you’re as you step forward gives you the best possible chance of succeeding. It’s not wishful thinking, it’s simply optimising your chances of behaving at your best. And that was as far as I took that particular idea.

Until this happened: A week after Bex and I were driving somewhere listening to the Steve Wright show on the eve of my new book being published, and I happened to say to her, “Wouldn’t it be great if I ended up on his show?” I was told by Leni, my lovely publicist at Hodder, that I was going to be. Now I can write that off to coincidence and happen-stance, but I’ve also said to Bex, on a number of occasions, how I’d love to be on a show with Stephen Fry, just because I like him so much. 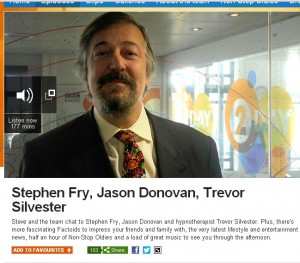 Well, imagine my surprise when that happened too. Kind of. As you can see, I was on the same show as our national treasure, but only because of the wonders of pre-recording, we never actually met, and he’s probably completely unaware that we shared the billing.

So, just in case Bex has some weird cosmic ordering facility, I’ve resolved to be more specific when I present my wish list to her. I’ve told her I’d like to be on a show with Stephen Fry, where we’re both there at the same moment. I’d like to be on Oprah. I quite fancy my own tv and/or radio show, and I’d like my book to sell millions. I haven’t figured out how to get the idea of Jennifer Aniston on said shows past her yet, but I’m working on it.

So be careful what you wish for, you might not have given the universe enough detail.

And here’s me on the show itself.R2 Steve Wright

I press play on the CD player and the opening bars of Madonna’s ‘Holiday’ suddenly filled the car. Instantly my two sons, Mark, 7, … END_OF_DOCUMENT_TOKEN_TO_BE_REPLACED