You are here: Home / Articles / Each One Teach One 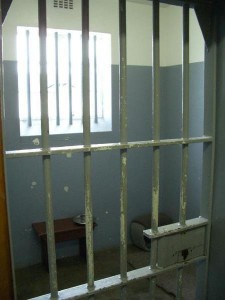 I’ve just returned from a holiday to South Africa – so brace yourself, because I saw so much that made me think “ooh, that’s a blog.”

Anyway, one of the defining moments of the holiday was a trip to Robben Island, where Nelson Mandela was held prisoner for 18 years. The tour begins deceptively, taking you on a coach tour of the island, showing you the village where the guards lived, with its school, and church and post office, and the house where Robert Sobukwe, another leader of the anti-Apartheid struggle, was kept. The engaging guide kept up a dialogue that just began to suck you in. She made us aware that nobody on the bus had heard of him, yet he was a pivotal figure, and how he was kept in isolation; the only way he could communicate with fellow prisoners was through gestures and hand signals, including them picking up a handful of dirt to signify they were all part of the same land.

And then we came to the limestone quarry where Mandela and many others toiled. The light reflects so badly in the quarry that most were left with damaged eyes. In the quarry is a cave, which doubled as a toilet, but also secretly as a classroom. Whenever the opportunity arose they would teach each other. They were lawyers, and doctors, and teachers, and farmers. each had something to give. And the phrase they used was the title of this blog; ‘each one teach one’. We were sucked in further.

I thought that a fantastic sentiment. Can you imagine sitting on the floor with a hammer, spending the day making rocks into smaller rocks? Can you imagine spending 18 years of such days? And in the midst of this attempt to destroy their spirit and degrade their humanity their suffering only served to concentrate it.

We were then passed onto a guide who was a prisoner there for 8 years. We sat in his old dormitory as he eloquently told us of the prisoner’s experience. The ‘sucking in’ was complete. All were silent, and many were in tears. He spoke of how black prisoners were given 100 grams less meat than asian or ‘coloured’ prisoners, who also got jam, but how the prisoners shared it equally between them. How they were only called by their number, not their name – Mandela is 46664 – and how they were cut off from contact with the world to make them feel forgotten.

He walked us past Mandela’s 6’x6′ cell – too small for him to lay full length – and the yard where he sat and broke rocks. In the corner of this yard is a vine that Mandela tended. I found it a moving example of how, when other choices and freedoms are taken from you, there are still opportunities to make other choices. I willed for a leaf to fall as a momento, but things that survive Robben Island give nothing up easily.

And at the end our guide told a little of himself, of his torture and suffering, but spoke most about reconciliation and the need for people to come together in unity.

So the experience for me was about the power of sharing; our knowledge, our time, our care and our humanity. And we all have something to give.

I press play on the CD player and the opening bars of Madonna’s ‘Holiday’ suddenly filled the car. Instantly my two sons, Mark, 7, … END_OF_DOCUMENT_TOKEN_TO_BE_REPLACED