You are here: Home / News / Following your nose

We live on the edge of Thetford forest, an ancient area once the home – and rumoured to be the site of the grave of – Boudicca. And on a misty autumn day it can be easy to imagine hordes of Celts emerging from the trees. Luckily, I count them as my home boys – after all, what did the Romans ever do for us?

It’s a great place to let the dogs run, and they differ in their response to freedom just as much as human siblings tend to. Fred will disappear for brief periods in pursuit of Betty, but return bursting with excitement at his daring, while Betty simply disappears – often for many long minutes, completely immune to our calling, whistling or promises of treats. She loves to follow scent trails, beyond anything else, and we reconciled ourselves long ago to the possibility that we might one day lose her to accident or angry stag in the pursuit of something she clearly needs to do. But it doesn’t stop us getting anxious when she goes beyond her average period of being ‘lost’ (and I appreciate the picture of them makes my description hard to believe. This was for a ‘butter wouldn’t melt’ commercial). 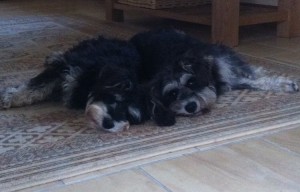 It occurred to me the other day, while holding my breath waiting for her to reappear, that the word lost simply doesn’t apply to her situation. With my limited senses Betty is lost to me once she is gone from sight in the tree-line or beyond the sound of her breathing. But I doubt that we are ever lost to her. With her amazing sense of smell and hearing I suspect she is always aware of our location, and the trees are a complete irrelevance. I realised that, if I imagined the trees gone, I’d probably always be able to see her, and that her path would be a series of wide arcs, with us as a point on that arc that she returns to periodically to check that we haven’t got lost.

My children have recently made me realise that maybe it hasn’t been so different with them. When they left home I worried about their ability to navigate life without my wisdom to guide them. Often, from my observation point, they seemed lost. I now realise they were just following an arc I couldn’t see – and like Betty, that arc is a search for what they’re looking for, not for what I want them to find. And they always knew where I was if they needed me, and, like Betty, periodically they’d return.

I realise now our children aren’t lost because they’re not following our path through the forest. They’re not lost because you can’t understand the choices they’re responding to. Often the trees I imagine them wandering in exist only in my head – to them life might appear a beach, or a wide-open space. What I’ve found is that, with my boys now 27 and 29, their arcs have led them to build their own lives, each quite different, yet both very much their own creation. And not only are they good lives, their journey has made them into men I’m more proud of than if they’d simply stuck to a path I might have chosen for them.

It’s not our place to choose our children’s arc, as much as our instincts yearn to, any more than we should keep Betty safe from our fears by keeping her on a lead. Our job is to equip our kids with the tools of travel, love them enough that we remain a point of return, and let them run. To paraphrase James Morrison, they’re not lost, just undiscovered – especially to themselves. And isn’t that act of self-discovery what life’s about? As much as a parent I’d like to shout “it’s over there!” it probably wouldn’t be for them. Show them the world, let them run, and remember to breathe. They’ll be fine, and they’ll bring home some wonderful things. Unlike Betty – last week it was a pigeon.

Only later into writing this did I realise that this metaphor applies to me as well. I thought I was sharing a learning I’d taken from my boys that might resonate with other parents, but now I realise it probably has a personal application to most of us. I spent a long time on a path marked through a forest subtly signposted by my parents (with my best interests at heart) and lit by my society, and as I look back now I was more lost on a well-defined route than I’ve ever been since I left it. When I finally abandoned it for my own arc, propelled by my own scent trail that I absolutely had to follow, I found happiness, fulfilment and like-minded people following their own trails. And my arc was opposed. I realise now that fellow-travellers on the forest path would have seen my swerve into the trees as a mistake in my orienteering – I remember to this day a colleague in a stab-proof vest asking me how I could abandon the security of the police with only 12 years left to my pension? I was about to include my parents in that lack of understanding when a memory suddenly came back to me: On the day I left the police I got a card from my mum wishing me luck and expressing her faith. She didn’t understand my detour, but she didn’t try to tug on my leash either. Annoying; both that she’s wiser than I ever give her credit for, and that at the ripe old age of 53 when I thought I’d finished learning about being a parent and was going to start on the grandparenting, I clearly haven’t.

When it comes to our own life I think it’s important to be aware of the choices we’re making and why. What others on the well-travelled path saw as a detour was actually the beginning of my real direction. My journey up until then had been a detour. Necessary in so many ways, and easily mistaken for the real thing, but a detour nonetheless. We find many students of Quest arrive at our door in response to that same realisation.

And you have to be ready for the fact that nobody else but you may understand your choice – until you meet others following their arc. To paraphrase Hugh Macleod, the more original your life choices, the less good advice people will be able to give you. So, if you have a scent in your nostrils that irresistibly stirs your blood, he says to ignore everybody. If you’re like Betty you won’t have to, yours ears won’t be listening anyway. That invisible scent your children are following could be to the life they’re here to live. That trail you feel drawn to could lead to the same thing. My advice is, take a deep breath…and run.

I press play on the CD player and the opening bars of Madonna’s ‘Holiday’ suddenly filled the car. Instantly my two sons, Mark, 7, … END_OF_DOCUMENT_TOKEN_TO_BE_REPLACED