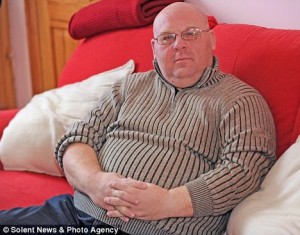 Darin McCLoud is a nice guy who had a recent bad experience with the press. He’s a diabetic and has had problems with his his weight for as long as he remembers. Having failed with diets on repeated occasions he believed that a gastric bypass was the best way to remedy the problem. However, when he approached his GP he discovered he wasn’t yet fat enough to qualify – at least not in his area. He needed to be 21 stone where he lived, but only 19 a few miles up the road. It was the postcode lottery we all hear about. Now Darin is a trade unionist and has a strong sense of social justice, so he went to the press with a solution that was intended to highlight the absurdity of his situation: he told them he was deliberately overeating to get him up to the 21 stone target.

The response from the press was far in excess of what he hoped – but not in the way he’d intended. The press whipped themselves up into a frenzy over this example – in their view – of a lazy, fat, stupid, selfish man. Film crews from as far as Germany asked him for interviews, and the exposure got so bad that he felt intimidated leaving the house. Shopping became impossible. As a traffic warden he was used to being hated – but for the thing he did, not the person he was.

I heard about his story and offered to help. I’d recently been on the receiving end of a journalist happy to twist my message for a ten second headline so there was a sense of kindred spirits from the moment we met. I also hoped for the opportunity to make a point.

Everywhere I look I seem to see a story about how gastric surgery – bypass or band – is the solution to our obesity epidemic. At £12,000 a pop I can see why the surgeons are pushing for this to be true, but in my opinion it’s madness. We’ve hundreds of thousands of people who are obese, and we’re going to cut them open. Seriously?

I’ve worked with people with weight issues for nearly twenty years, and I’ve had many clients who learned to respond to bad experiences through a distorted relationship to food – some by restricting their intake, some by doing the opposite. my strong belief is that gastric surgery might help an unhappy fat person lose weight, but without addressing the psychological reason why they overeat in the first place what you’ll have afterwards is just an unhappy less fat person. In essence you’re just sticking a plaster over the problem and I think it’s likely that the continued unhappiness will often lead to another harmful behaviour.

The whole concept of surgery perpetuates the idea that food is the enemy and our body is a battleground – that’s it’s purely a physical problem to be solved. But food is just energy and a thing we enjoy the taste of. In my opinion, if it has any greater significance in your life it has ceased to be food and become a symbol for something else – like love, company, comfort, rebellion, or safety.

What I’m suggesting is that many people have formed an emotional relationship to food as an antidote to feelings they experienced about themselves when they were younger. 90% of what we do is driven by the unconscious – at least that’s what scientists are saying – and I think that includes those times when we are driven to act in ways we wouldn’t consciously choose. That includes pretty much every problem clients bring to therapy: being scared of things most people aren’t, feeling anxious when most people aren’t, doing things that you’d like not to – like smoking or under/overeating – or not being able to do things that you would like to. They are all responses driven by your unconscious. The good news is that they all have a positive intention. Your unconscious is trying to protect you, it’s just doing so based on some faulty programming from when you were younger. Fix the programming and you fix the problem.

So Darin came to see me. We had one session and he identified the source of his connection to food and changed it. I recorded a download for him to listen to every night – similar to the ones dozens of people have lost weight with since they were launched on the Thinkingslimmer site. Did it work for him? Well, Darin responded to his experience with the press in the same way I did. He’s blogging about it. You can read how he’s doing now here.

What I want you to pay most attention to is his attitude. It’s great that he’s getting slimmer – but it’s even more important that he’s getting happier. Feeling in control of his choices is a key element of that, and his ability to change his attitude to food becomes a great symbol of his ability to change his life. If you can change the thing that has defined you for most of your adult life, what else are you capable of achieving? Helping clients answer that question is one of the things that keeps me loving what I do. In my opinion the world is going to see a very different Darin in the future.

Would this work with everyone? Of course not, nothing does, and I’m not saying that all weight issues are psychologically driven – for where that’s not the case gastric bands may even be the answer.

But if you have a problem I’d invite you to apply my description of where they come from to it and see if it resonates with you, because if it does, my message is you can change. Our minds are plastic, they’re changing all the time. The only problem is, if faulty programming is driving the change you tend to become more of what you don’t want to be. Darin is a good example of how, if you’re helped to write your own program, you can become much more of who you would like to be. Seeing a Cognitive Hypnotherapist could be where the re-writing of yourself begins.

I press play on the CD player and the opening bars of Madonna’s ‘Holiday’ suddenly filled the car. Instantly my two sons, Mark, 7, … END_OF_DOCUMENT_TOKEN_TO_BE_REPLACED