I press play on the CD player and the opening bars of Madonna’s ‘Holiday’ suddenly filled the car. Instantly my two sons, Mark, 7, and Stuart, 5 burst into excited song. I sing along too. It’s 1991, we’re on our way to Majorca, and I’ve never felt so lost and alone.

I was a year into being single after a painful divorce. Is there any other kind? To add to the weirdness of singledom after ten years of marriage, at the same time I threw my career up into the air by transferring from Thames Valley Police to the Met. I went from everything and everyone being familiar, to me feeling that I understood virtually nothing in my life. It had been a long, mainly lonely, scary, and pretty empty year.

In ways I didn’t really appreciate at the time, my boys had been my anchor. I had them every day I had off and they gave me a focus I otherwise lacked – even if sometimes that was only to spend hours when I was alone keeping ahead of them on the Nintendo. I’ve found sometimes focusing on anything you can manage, no matter how trivial, is better than focusing on everything you can’t. And at that time, life was what I felt I couldn’t manage. In the midst of feeling like I was stuck and drifting at the same time, I decided I needed a holiday, and that they deserved one, so I took out a loan, chose a destination, and we were off.

It was strange picking them up. It almost felt like a hire car scenario, where they were being given to me in perfect condition and their bodywork would be checked when I returned them, so when Stu’s eczema flared badly on his feet midway through the holiday it necessitated carrying him around several Farmacias to find some cream for his feet and something for my panic. That aside, we had a brilliant time. Pizza every day. The same pizza. From the same place. We were completely sure – and remain of the same opinion – that it was the best pizza we’d ever had. 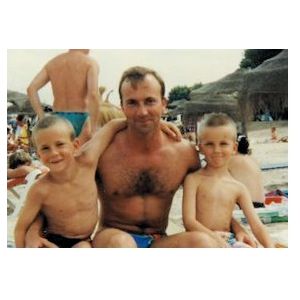 We spent long days on the beach talking boy, playing football, building stuff. I remember waking one morning to find Mark drinking out of the fountain in the bathroom. It was a bidet. Foreign seemed a lot more foreign back then.
And in-between I had time to think, and hope, and dream. They revived me, although, again, I didn’t properly appreciate it at the time.

And while Stu swears I did him irreparable psychological damage by letting him drift out to sea on a Lilo, (does 8 feet count as ‘out to sea’?) at the end of the week I dropped them off unharmed, bodywork mainly intact. I cried in the car the whole way home.

2014. Menorca. I press play on my iPhone, and Madonna plays again. It’s a song that’s either lasted the test of time or nostalgia is what it used to be. I share a smile with my boys, and we raise a glass. We’re in a nice café overlooking a stunning bay. I look at their plates. Pizza. Pretty sure they still had it every day. Stu tries his beautiful one year old daughter Sasha with a crust, Mark pretends to be shot by his amazing two and half year old son Heath. My heart couldn’t be more full.

We have a week together. The boys, their wives, Bex – who’s done just about everything to make the whole thing possible – our grandkids, and me. As you can probably guess, it was a very special time for me – and I think for them too, the Majorca holiday was as big a deal in their childhood as a three year loan repayment could have hoped for. We have great memories of us there, and it’s a wonderful tradition to build on with our new generation. I can’t wait for next year.

So why am I telling you this? Well, it depends who you are, because what I want to say, to anyone who needs to hear it is…keep going. You might feel lost right now, maybe even hopeless. You may feel that you’ve made choices you can never recover from. I think you’ll find you’re wrong if you just keep seeking what you’re looking for, even if you don’t know what that is. Keep looking. As I sat watching them build sandcastles in Majorca I didn’t know I was just a few months away from becoming an instructor at Hendon training school, where I would discover the calling that would give me a purpose to my life that changed it utterly. While I was eight years from finding the love of that life, it needed me to keep going to find her. As Steve Jobs said, the dots only join up when you look back. I agree; ahead is supposed to look chaotic, but the dots are out there, and you’re the pen. Keep going.

I want to say to whoever needs to hear it, don’t let yourself be limited by anyone, including those you love. Especially those you love. There would be many occasions when I felt trapped or held back by a feeling of responsibility to my boys. But I wasn’t, I was trapped and held back by my lack of belief in myself, and just blamed them for it. And I proved that when I threw my life in the air again by leaving the police and starting a new career as a hypnotherapist while the boys were still at school. So I know just how different life feels when you make yourself responsible for everything you do or don’t do. And I know how much more free I was to love my kids when I stopped making them a burden. 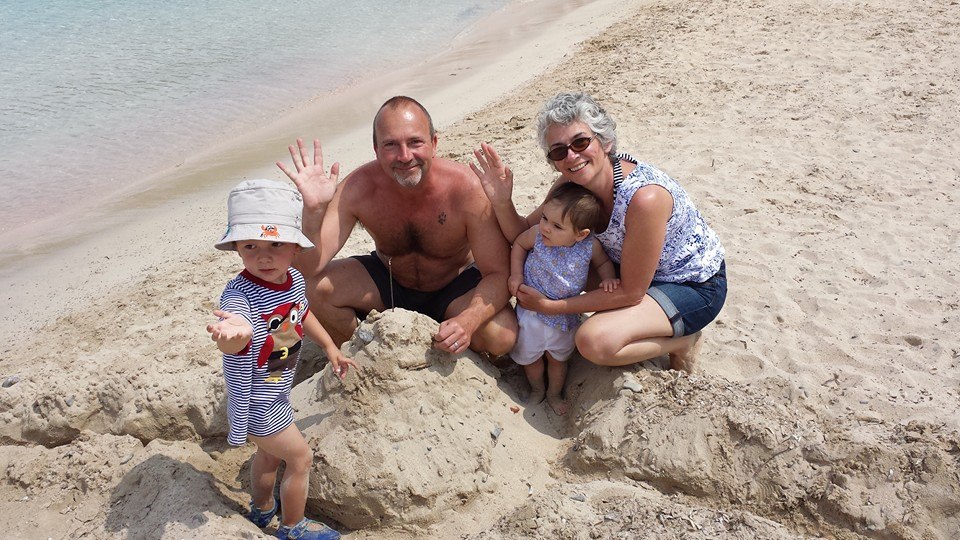 And I want to tell you that things will work out if you keep going, just not how you might have expected or dreamed. I had no idea that one day I’d be sat watching my sons being fantastic fathers, or feel my heart melt at Sasha’s smile of recognition or Heath’s giggle when I tackle him in beach rugby.

As the saying goes, everything turns out ok in the end. And if it’s not ok, it’s not the end. My only caveat to that being, take action, keep going, keep looking, keep learning, and make your life your responsibility. And eat pizza on the beach with anyone you love, as often as you can.

How many of you knew that the word ‘Institute’ is protected by law, in that you are only allowed to use it with the permission of … END_OF_DOCUMENT_TOKEN_TO_BE_REPLACED