You are here: Home / News / Our youngest son got married

There are days that punctuate our lives, and weddings tend to be one of them. They can also be opportunities to count your blessings, and to tune into the circle of life. Our second son got married last Saturday. The ceremony was conducted in Orleans House in Richmond, a beautiful location built by George II for his wife. We were blessed with good weather – sunny but not too hot, because who decided that men should wear three layers of morning suit while woman can shimmy about in diaphanous sleeveless creations? Not that I’d look good in the latter, but I’m all about choice. 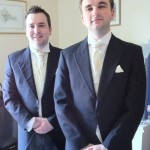 Waiting for the bride gave me a chance to watch my sons. Two years ago Stuart, the youngest, was best man to Mark. This time the situation was reversed, although apparently not the worry; Mark looked the more nervous by far on both occasions. I’ve no idea how your children turn out liking each other, especially when they’re so different. My two spent their childhood in a small bedroom in bunk beds, even when they had the choice to have separate rooms. We always encouraged them to sort out their own disputes, and somehow they did – and during the teenage years when my brother and I drifted apart, they stayed together, sharing friends and hanging out. Football was a glue, but love was by far the more powerful adhesive. And in that room, waiting for the bride, it was never more evident. 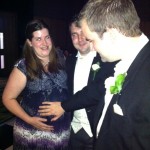 Sitting quietly was Mark’s wife Tara, heavily pregnant and glowing with our first Grandchild. Should he have a capital letter like that? I’m not sure, but he feels that important to us all. At one stage I knelt beside her, touched her tummy – which is obviously public property now – and said “Just think, in 25 years’ time we could be sitting somewhere like this watching him get married.” Like I said, weddings are part of life’s punctuation, and a grandson present makes you realise that the story being punctuated isn’t just your own, or the happy couples, it’s endless. 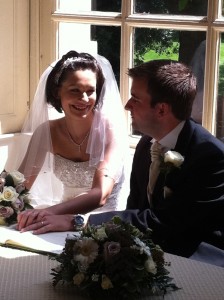 The bride arrived. Ksenia is Russian. We live in a wonderful world where people can be raised thousands of miles from each other and find love, and somehow the unlikeliness of that made it even more precious. Maybe others felt that too because the room was awash with emotion as she entered. Tara was in tears almost immediately – so maybe she had her hormones on full and we were just caught in their waft. That’ll be my excuse anyway. Ksen radiated. Of course she looked gorgeous, it was always going to be a given, but throughout the ceremony she had a smile whose proportions challenged her face to contain it – and every time the word marriage was mentioned it got even bigger. Her happiness was utterly contagious. And when Stu and Ksen are together the world seems to recede from them a little, you can almost hear a click as they come together and the world has to fight to gain their attention. As his father it’s wonderful to see. At Mark’s wedding Stu was a four day drive and a boat trip from a place called love, and doubted its existence for him. I could have had a ‘told you so’ moment, but it escaped me in the relief. He’s not doubting now, and your children finding love is the biggest reason for a parent to relax that I’ve experienced.

The wedding speeches were informative too. Ksen asked me to speak on the morning of the wedding. Who needs preparation, I’m a professional? I stood, I looked at them, and my mind went blank. All the clever things I meant to say waved from a distance. I stumbled through some stuff, and it’s going to need the dvd to remind me exactly what, and I sat back down in record time. Stu fared much better, and then it was Mark’s turn as Best man. I knew how hard he’d worked on the speech, and how much he wanted to do a good job for Stu. And he looked at them, and the same thing happened to him! It wasn’t quite like Smithy in Gavin and Stacey, but it will be when we talk about it in the family in the future, after all, that’s how family myths are made. And do you know something? I have never loved him more than I did at that moment. Seeing Stu so happy, how could he contain his emotion? And why would he, we’ll remember his love a lot longer than we’d have remembered his jokes. They have women they love, and they have each other. I’m a lucky man.

I press play on the CD player and the opening bars of Madonna’s ‘Holiday’ suddenly filled the car. Instantly my two sons, Mark, 7, … END_OF_DOCUMENT_TOKEN_TO_BE_REPLACED