You are here: Home / Media / Featured Media / Sofa so good.

“You’ve spilt yoghurt down your tie” said Bex, with not as much disbelief in her voice as I’d have liked.
“No I haven’t” I said, without even looking down. That kind of denial didn’t even work when I was 6, but I still seemed to cling to the hope that wishing it untrue would make it so.

Yoghurt pots are evil. I had held mine at arms length and opened it away from me, and still its contents found a home on my first choice tie. Actually, only choice tie, because I discovered when I turned the tv on in our hotel room that Charlie Stayt, one of my interviewers that morning on BBC Breakfast, was wearing one pretty much identical with my spare. So dabbing with a damp napkin it was. Hurrah for HD television.

I’ve never done television before, so both Bex and I were just up for enjoying the whole experience, which was very easy. The new BBC facility in Media City in Salford is just amazing, the staff gently and kindly efficient as they brought us in wide eyed and giggly, let us enjoy the legendary Green room – which actually isn’t green – took me through makeup (it seemed to take a lot of anti-glare gel on my forehead to satisfy the makeup girl) before the floor manager ushered me into the studio. Twenty minutes tops from street to red sofa. One minute I’m watching Susanna Reid and Charlie on the hospitality tv, the next I’m being introduced 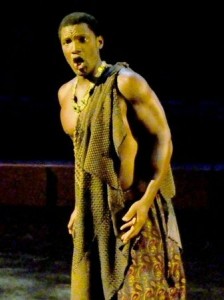 to them. Anyone would find that a bit odd, it’s like inflating something flat into 3d. “This is Noah Stewart” said the floor manager…Hello, that’s even more odd…Susanna looked up and smiled, “No it’s not.” I’m glad she noticed, at that stage I was prepared to be anybody. The floor manager was hugely apologetic. “Don’t worry, I get mistaken for him all the time” I said, trying to help. Another smile from Susanna, “Do you really?” “Yes, it’s a curse, actually, because I can’t even sing” “That’s a shame,” she said, “he was discovered as an understudy”. It was a good start.

They both relaxed me so much I wasn’t even sure we’d started. All the cameras are remote controlled so I think we were the only three people actually present in the studio, and they didn’t even really look like cameras ( I was looking for Grandstand models circa 1970, I think), which made the whole atmosphere very calm. My spot was actually reduced because of the breaking story of the morning – which presented its own challenge; “Oscar Pretorious has been arrested for shooting his girlfriend. Now in the studio we have Trevor Silvester to talk about how to get on better in relationships”, but I loved the whole experience, although it was a lot of a blur during the actual chat, and it was great exposure for Lovebirds. I hope I get the chance to do it more.

An unexpected highlight was meeting a celebrity. My first sight of him was him being carried shoulder-high across the plaza of media city. I was a bit miffed actually, as I had to walk. Didn’t they know who I was? 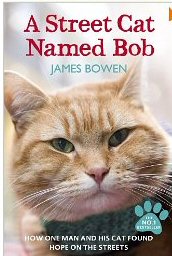 Bob the cat appeared in the green room shortly afterwards with his ‘owner’ James Bowen, who let him skip down from his shoulder and did his manful best to dissuade him from a pan au chocolate. These celebrities. For those of you who don’t know, James was homeless, selling the big issue and busking as part of his fight to leave his addiction to heroin and methodone behind, when he met an injured Bob. They nursed each other back to health and have become inseparable. James openly contends that Bob was a bigger feature of his recovery than any treatment programme he’d ever been on. The love between them is both obvious and inhaleable, and you can’t be in their presence without being refreshed by it. Maybe that helped my unexpected calmness in front of camera, or maybe it was the reminder of what is really important in the world – people, nature, and what can emerge from the connection between them. Read his book, you’ll love it – and I don’t even like cats.

And I want to thank the unbelievable love and support from my friends both before and after the interview, they really enhanced the whole thing by the way they joined the excitement. Another unusual day. I wonder what will be the next?

I press play on the CD player and the opening bars of Madonna’s ‘Holiday’ suddenly filled the car. Instantly my two sons, Mark, 7, … END_OF_DOCUMENT_TOKEN_TO_BE_REPLACED