You are here: Home / News / Wilma, an amazing dog with two brains.

I know it’s probably rare for a blog that usually focuses on therapy issues to turn into a health report on a little dog, but a lot of you have asked me for an update on Wilma, and this seemed a good way of doing it. And if you’re interested in the brain I think you’ll find it interesting even if you don’t care about dogs. Which is a therapy issue by the way, because all well-balanced people do. 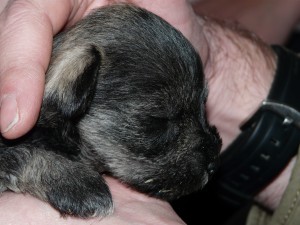 Quick backstory: We met Wilma 11 months ago when she was two weeks old, very soon after losing Barney, the third member of our marriage. Without doubt she was an attempt to fill the void that followed us around the house and as such we projected onto her a raft of hopes and dreams of a future together, and sublimated our grief into love for the adorable baby of the litter who popped her big-eared head from out of her siblings and made us choose her.   Looking back now there were signs that she was different from the beginning. She didn’t seek our faces as dogs usually do, she circled anti-clockwise before emptying, and she seemed to have no instinct against messing in her bed. But we hadn’t raised a puppy in years so thought it was all going to correct itself with time. Then at 11 weeks old, in the space of a day, she collapsed into a coma. As bad luck would have it I was in London so Bex and Jan drove her to a nearby vet hospital where she spent three days on a drip. The vets never got to the bottom of what it was. Dehydration was the symptom, and a virus was vaguely suggested as a cause. We breathed again and moved on. From then we realised that she didn’t actually drink water. If we flavoured it with goats milk she would, if it was running water she might, but she had no apparent instinct to respond to thirst. On several more occasions we had to take her to the vet for rehydration treatment because of lethargy and disorientation. And along the way we realised we had a ‘special’ dog. She continued to have no compunction about messing her bed, or indoors if she couldn’t immediately get into the garden. She was obsessive, about the cars passing the house, about running water – I twice had to wade into a stream to rescue her – and flies, to name a few. She would endlessly pace in circles –always anti clockwise or dig in the corner of the kitchen. Meeting new people would send her into manic barking which would last as long as the meeting. She was high maintenance, and it was exhausting. 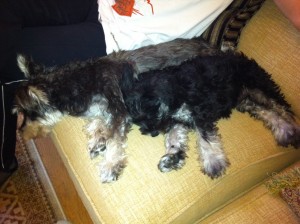 Two months ago we bought her a sister – Betty – partly in the hope that a companion would soothe her anxiety and maybe teach her more normal dog behaviour, and to a degree it was very successful. They love each other and Betty definitely distracts her, often by hanging off her tail. At the same time we returned to the referral hospital about the behaviour and the refusal to drink and they suspected from her blood tests that she had a liver condition We were due to begin treatment for that prior to a biopsy when we returned from holiday.   In the event we had to fly home early. Six days into it our brilliant dog-sitter Lesleyanne took her into the vet. Again she had become dangerously dehydrated, even though she had been diligently given enough water. She was admitted to the hospital again where, 4000 miles away we were given various diagnoses of meningitis, liver disorder, and ‘we just don’t know’. We decided to fly home. What followed was a week of waiting for them to find something, which they finally did after four days. An MRI scan detected two abnormalities in her brain. The first was strangely shaped ventricles, and the second was she has no corpus collusum. For those of you who don’t know, this is the rope of nerves that connect the left and right brains and allows them to share information. To be honest we were stunned. To be honest I think we still are, not so much that it’s that that’s wrong with her, although it’s incredibly rare, but more for how she copes with it. Suddenly, instead of our focus being on her strangeness, we marvel at the things she manages to do that are normal. You’d expect her to be clumsy, but actually she’s amazingly nimble and lithe. She connects with us, and has learned a range of verbal commands. In most respects and on most occasions she passes for a normal dog. I find myself fascinated by her, watching her and trying to figure out what she’s having to do to understand her world – and what we can do to help her. Here are the things we have so far connected to her condition, and the guesses we’re making about them in the absence of any research:

Every day gives us more ideas to test to help her world be more knowable to her, and we’re taking each day at a time, because, unfortunately it’s not the split brain that is our biggest worry. There is a possibility that, along with having no instinct to drink (which is connected to split brain) she doesn’t absorb water properly either, so she’s in a permanent state of dehydration. We worry that her frantic digging and pacing is a sign of distress or pain. That’s not something she should have to live with. Also the misshapen ventricles can be a sign of a particular kind of nerve degeneration called NCL. It’s fatal, incurable, and would make the rest of her life short and miserable. She had three biopsies, liver, gall bladder and lymph, and this condition is also so rare that they’ve been sent to Italy for diagnosis and we won’t know the results for a month. What is on our side is the odds of her having two such rare conditions, but when they’re both to do with brain malformation they seem more like variations on a theme to us, so we’re holding our breath. I won’t bother going onto what could still be wrong with her liver. 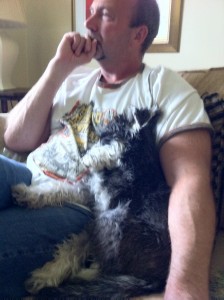 And of course while we do that Wilma gets on with her life. Despite us telling her to take it easy and not risk her stitches, she fights with her sister and jumps onto the sofa. Unlike us she sleeps soundly, of an evening on my lap, completely oblivious of the excruciating joy that brings. She gets excited for her walks and continues to try to throw herself in the stream. And she’s put five days of what must have been an incredibly stressful hospital stay behind her like it never happened. I aspire to dealing with life like a dog. They deal with what happens, don’t make it about them, and move on in the hope of a biscuit. If there is a heaven I think it’s more likely to be for dogs than for us. And she effortlessly continued a dog’s cleverest trick – getting us to love her even more with each day that passes. Which is the opposite of what our heads want, but, for better or worse, that’s not what we’re joined to her by. While our thoughts predict difficult days ahead, our hearts hope. So we’ll try to live each day in the way Wilma does. You find lessons in the unlikeliest of places. Thanks you for all your good wishes, we’ll let you know how she’s doing.

I press play on the CD player and the opening bars of Madonna’s ‘Holiday’ suddenly filled the car. Instantly my two sons, Mark, 7, … END_OF_DOCUMENT_TOKEN_TO_BE_REPLACED