You are here: Home / News / Wilma: one door closes

This is a blog that’s been sitting like a lead weight in my stomach. The shortest way to start it is just to say that we put Wilma to sleep. So many of you contacted me with messages of support following my last blog about our remarkable little pet that I knew I’d have to share this with you, when all I really want to do is put it in a quiet little place while the scab thickens.

Still, a thing I’ve learned that has helped me through a lot of things is the idea that when one door closes another opens. I use it with my clients to help them gain perspective on the bad things that litter their past, but we’ve found it can also help with a present misery; not just to wait for a new door to open, but to actually choose a door that might lead to something good coming from something bad and turn the knob yourself.  So this is about that, rather than just me howling at the moon.

Despite our hopes to the contrary, Wilma was in decline. While we waited for lab results from Italy identifying a degenerative nerve disease, the evidence of something amiss beyond her two-brainedness was building before our eyes. Her anxiety increased to a point where it was nearly ever-present – on one occasion she circled the kitchen table for three hours without us being able to distract her. The only relief she seemed to get was when she played with Betty, or in the evening when everything slowed down as we watched the TV. She’d either fall into an exhausted rest on my lap, or crawl onto Bex’s chest and sleep like a baby. She became ever more obsessive – food being her last fad; she lived for the routines of meal times, or morning coffee which she joined in with us with a favourite treat that she wouldn’t let us forget.  At the same time her incontinence continued unabated, as did her barking at each and every sudden sound or unfamiliar visitor. There didn’t seem to us to be very much quality to her day, it was just something for her to survive. It was no way to live her life, but it still felt a massive and dreadful  responsibility to choose to deprive her of it. Mercifully, after we’d finally grasped the nettle, something happened on her final evening that was awful and yet reassuring: she lost the use of her back legs for about twenty minutes, something we’d seen hints of for several days. We knew then that we were right.

We took her to our lovely vet Alastair, who saved her for the first time at 11 weeks of age, and who struggled not to join in the tears. All I can bring myself to say about the event itself is that the first thing she did when we met was lick my nose, and it was the last thing she did as we parted. Sad, sad, sad. It is an appalling thing to see beauty die by your hand, however sound you know your motivation to be. 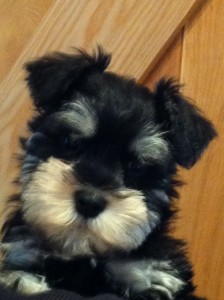 And so I want to move quickly on to the door that opened. Betty and Wilma had formed a friendship that, while odd, we felt she would be sad at losing. We’d also discovered that two dogs are more than twice the fun of one. And so, a week before the date we booked with Alastair, we brought home another puppy. Fred – obviously we had to keep the Flintstones theme going but I’m not going to shout “Pebbles!” in a public park, and Bex didn’t fancy Bam Bam. It worked. In just a week he and Betty became inseparable – interestingly he never once approached Wilma – and heartbreakingly for us, Betty seemed to move away from her too. It was a bitter-sweet week where we could give her the best of our attention and love in the knowledge of what was to come.

But we definitely opened a door. Perhaps as a defence mechanism we have fallen deeply in love with them both, as individuals and as a pair. They are a delight. Fred is a feisty, cheeky little boy whose tail wags every time he catches your eye, and Betty – nicknamed ‘practically perfect’ – at only five months old has absolutely taken on the mantle of older sister. Just their very normality after Wilma brings a pleasure. Just to see them drink water is a reason to pause and smile, while watching their playing takes up an awful lot of our day – notice I didn’t say wastes; I’m sure the chemicals they release in us are wonderfully beneficial.  Although every time I watch them my mind briefly flicks to Wilma and I get a stab of sadness about what we hoped her life with us would be, already when we speak of her it’s about the things we loved about her, and anyway, I want that sadness for a while. Neither of us regret the year we had. She helped us get through the loss of Barney, and she brought Betty and Fred into our lives. And more than that, I think sometimes you grow just by caring for someone who needs you. Whenever she relaxed in my arms I felt privileged that I made her feel safe, and I’m sure Bex felt the same way. We all gained from each other, and we’ve all lost, but life is a series of ups and downs, and sometimes you just have to accept that some downs have particularly steep slopes, don’t you?  I know I over-attach to dogs, but like Winston Churchill once remarked about alcohol, I take a lot more from them than they take from me. Love is worth the loss. The question that helps me through it is, what can you turn the loss into? On this occasion the answer was more love.

Interestingly the weight has disappeared from my stomach now I’ve written this, which reminds me of another thing I’ve learned: Never leave difficult things ahead of you if you can avoid it; put them behind you as soon as you can.

So, bless her heart, she was an awesome little life, and she can rest easy now. And I’d like you to look through the door we opened and say hello to our little Flintstones.  May we be blessed with many years together.

I press play on the CD player and the opening bars of Madonna’s ‘Holiday’ suddenly filled the car. Instantly my two sons, Mark, 7, … END_OF_DOCUMENT_TOKEN_TO_BE_REPLACED